Overview:
Spend some precious moments on the waves and absorb positivity from blue skies and cool breeze. The combo tour allows knowing the Barcelona City from land and water. Admire the beauty of the unfurling the Mediterranean Sea and the lovely architectural masterpieces of the city. Hop on and hop off, as you like to enjoy the tour at your own pace. This combo also includes a hop on hop off bus tour in which you can get up and down the bus as many times at your leisure. A map will be provided that will indicate the stops and discounts. The buses are suitable for people with physical disabilities and reduced mobility. Anatomical seats, electric roof, stewardess adds to its feature.


Description:
Visit every corner of the city and witness the significant places in Barcelona. Uncover the secrets of Barcelona with a unique perspective. With a boat tour, you can sail along the coast and see the magnificent views of buildings forming the skyline.


Hop on the double decker bus and witness museums, parks, beaches, and other hidden attractions. Sagrada Familia, one of the most visited basilicas of the world brought together the light, nature, and religion into one architectural piece. Barcelona Cathedral, a Cultural Heritage Site is worth seeing due to its impressive Gothic architecture.


For football lovers, Camp Nou stadium is the must-visit the place. The F.C Barcelona museum adds to its significance. La Pedrera is another masterpiece of Gaudi’s architecture and made its place in UNESCO’s World Heritage Sites. Park Guell is a fantastical example of Gaudi’s imagination.


The artist himself created the Picasso Museum with more than 3,800 permanent collections and the place for temporary exhibitions. The most famous and renowned street in Barcelona is La Rambla that offers a large number of shops, attractions, artworks, and flower stands. Feel the magic of water, light, and music at the Magic fountain show. The other attractions include Montjuic hill and the village Poble Espanyol, and Barrio Gotico.


BARCELONA PORT RUTE LAS GOLONDRINAS:
The various areas covered by this itinerary are the Europe bridge, Maremagnum area, the panoramic beauty of the Montjuic Mountain and the lighthouse at the castle which is still working, the old lighthouse to see the fisherman boats, the W Hotel, and place where tourist cruise ships are docked. Barcelona port has made its place at 4th position in the ranking of Ports with a tourist cruise ship of maximum number.

Ticket Redemption:
You must carry printed vouchers.
Barcelona City Tour: Departure and arrival from Plaça de Catalunya, Winter 9:00 AM to 9:00PM; Summer 9:00 AM to 8:00 PM.
Boat Tour Las Golondrinas, Barcelona Sea Route: Departure and arrival from Las Golondrinas stand in Port Vell, in front of Columbus Statue.
Mobile or E-vouchers are not accepted.


Additional Information:
Wheelchair Access with Manual Ramp
Pets are not allowed on the buses.
Both routes depart and end at Plaça Catalunya but you can hop on and hop off at any bus stop.
Boat Tour Las Golondrinas is not a guided tour.

Cancellation Policy:
No cancellation charges up to 24 hours before the chosen travel date. If cancelled, 24 hours or less prior to travel date or in case of no-show. 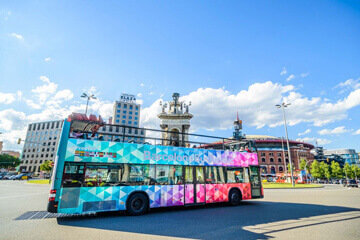 Your Ticket is valid for 1 Day or 2 Days