The splendid capital city of Wales, Cardiff is one of the loved tourist attractions worldwide. The city showcases famous well-preserved castles with great historic significance, notable museums and bustling shopping outlets. Cardiff is also a very green city and is surrounded by five different castles. Still wondering, how to explore the whole city in a go? Your answer is comfortable Hop on Hop off buses. Tourists are welcome on board the open-deck buses for complete city sightseeing at the most pocket-friendly budget.

Entry of the city is exciting as it sprawls between a medieval castle to a modern waterfront. The young capital clearly shows how rapidly it has made it stand by the status it got. It is not only rugby that brings attention to the city but also its modern architecture. Few excellent shopping options is another reason for drawing loads of crowd to the city, especially during the weekends. You can see a massive amount crowd descending to bars and pubs and cheering over football matches as the nightshade falls over the town. Day trip in Cardiff includes adjacent coast, valleys, ancient castles, and interesting Industrial sites.


Enjoy unlimited 24 hours Hop on Hop off travel experience at your pace. Starting from the 2000-year old historic site of Cardiff Castle, we move forward to several prominent landmarks like the scenic Cardiff Bay, National Museum of Cardiff, Principality Stadium for sports lovers, Cardiff’s City Hall and various important churches. Tourists can jump off the bus to explore the sensational shopping streets.


Hop On and Hop Off at the Cardiff Bay, a common term given to the surrounding areas of the Cardiff city. It is also the waterfront of the city and the falls in the southern part of the city. The Cardiff Barrage creates the water body, and the area is a famous urban arena, featuring shops and eateries. The place also has historic buildings and exciting marine life. Visit the Norwegian Church Arts center. A Lutheran Church, it was consecrated in 1868. This place has been the place of worship for the Norwegian community of the city and the Scandinavian Sailors for a long time.


Cardiff is surely one of the greenest cities in the United Kingdoms, and Bute Park is the stalwart of all the greenery in the city. After exploring, shops and eateries in the much celebrated Cardiff Bay, the Bute Park is an ideal place to sit and relax. It is one of the major parks in the city and lies peacefully beside the river featuring some rare trees. The park is also popular for the Victorian gardens, ruins of the Friars and a small café. This 130 acres decorated garden was once a ground for the Cardiff Castle.  Finally, to understand the Welsh culture from its core, visit the National Museum of Wales or the Amgueddfa Cymru. The Museum comprises of seven other museums in Wales out of which the National Museum and the St Fagans National Museum of History are in Cardiff.


With the TootBus Hop on Hop off Cardiff Discovery tour, tourists get a golden chance to see the major sites of the city without any further planning and arrangements. Just book your tickets from our website and leave the worries on us. Our local guide, neat and clean buses and economical ride makes it one of the best way of city sightseeing.

Operational Season: All year round; Daily except 24 & 25 Dec
Frequency: Buses will be running from 10:00 to 17:00, every 30 minutes
Full Loop: Approx. 60 minutes
Departure Point: Kingsway Cardiff

Ticket Redemption:
You can board the bus at any stop and voucher can be exchanged directly with the driver on board.
Mobile vouchers accepted on board.
Book Now! You can use your ticket any day within 12 months from the booking date.


Additional Information:
Free Wi-Fi
Buses run daily from 10:00am to 5:00pm Frequency at the stops is 30 minutes.
Hygiene Measures: We have implemented reinforced health and safety measures on board and acquired the official Industry Standard "We're Good To Go" from Visit England as well as the globally recognised World Travel and Tourism Council's "Safe Travels Stamp".
Flexible Ticket: Tickets are valid for up to 12 months from the booking date, so you can book today and travel later.
The ticket validity is 24 hours from the time of redemption.
Face coverings are mandatory but masks not provided. Please bring your own masks.


Tootbus App
Download our App and explore the city like a local:
Import your pass ready to scan
Prepare your journey by checking our itineraries
Find the nearest bus stops and monuments on our interactive map
Locate buses in real time
Discover the secrets of the must-see landmarks with our audio guide commentaries


What is allowed on board?
To avoid any danger, we kindly ask to remain seated during the tour and keep with you your personal items (luggage, push chair…).
To keep our buses, clean for you and for your comfort, no food is allowed on board.
Animals (small ones and guide dogs) are accepted on board. Except for guide dogs, animals need to be positioned on your knees.
Please have also in mind that smoking is not allowed on board of our buses.


Customer Care:
If you have any question regarding the tour, you can contact local customer care team at [email protected] or 0044 (0) 1225 330 444
Address: TOOTBUS Cardiff, 5 Kingsway, Cardiff.


Cancellation Policy:
You can now amend or cancel your ticket for free of charge upto 24 hours before the chosen travel date (During the ticket validity period.). 100% cancellation fee applied within 24 hours of travel date.
This ticket is non-transferable.

More Things To Do in Cardiff 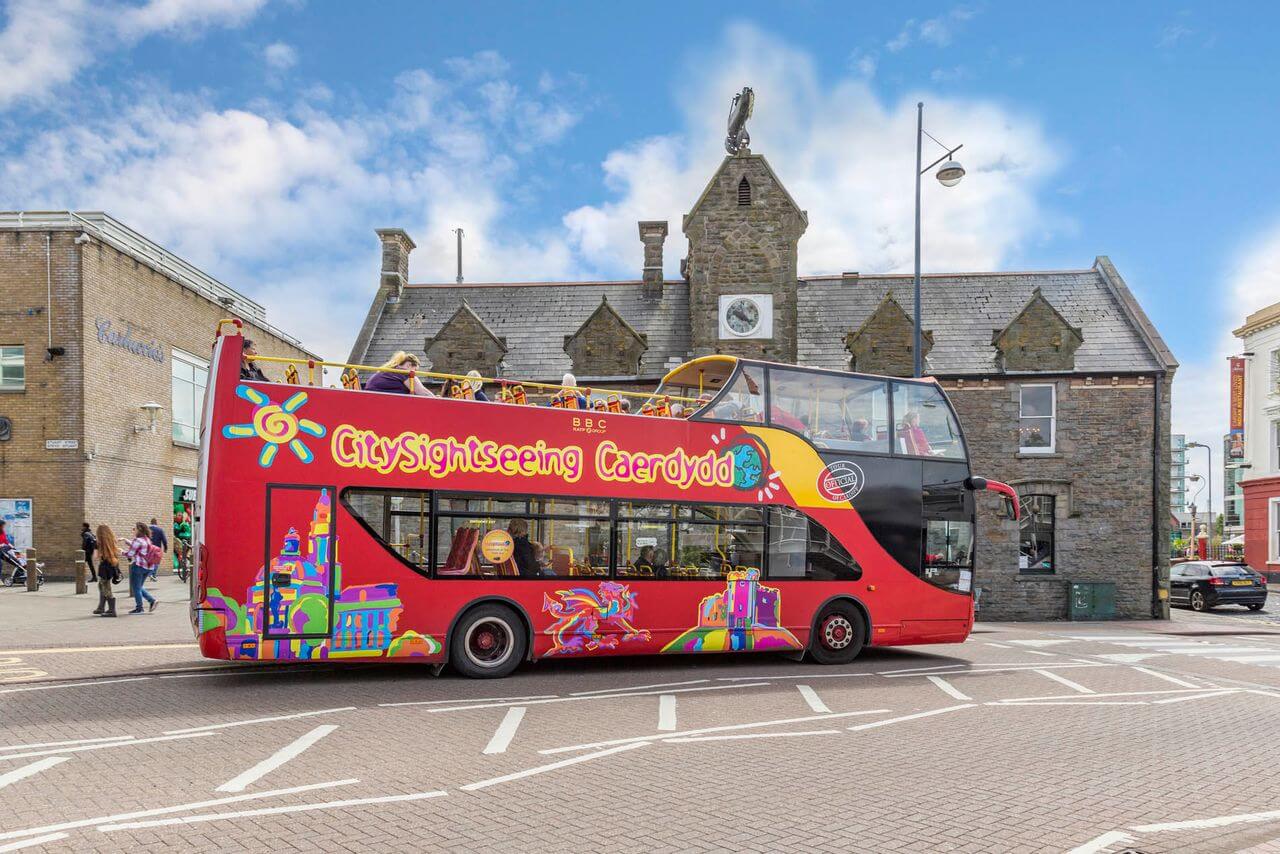